A special visit from the WTPD!

A special visit from the WTPD!

​Upon arrival to the scene the Washington Township Officers located the victim, a juvenile, in the roadway who fell off of her bicycle, causing a traumatic injury and significant blood loss.  The Officers provided head/neck stabilization, oxygen and continuous direct pressure to the wound.  The mechanism of injury was located and placed aside.

​Paramedics arrived on scene and assessed the victim.  It was deemed necessary to immediately transport the victim to Hackensack Hospital’s Trauma Unit for injury.  The Washington Township Police Department provided an escort to the Hospital for the WTVAC and Paramedics.  The incident was deemed accidental.

​Two days later the patient was released from ICU and allowed to return home.  The following day members of the P.B.A. Local #206 Washington Township Unit responded to the residence of the victim to check on her and to bring gifts. 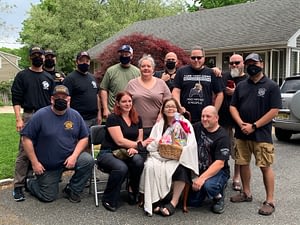